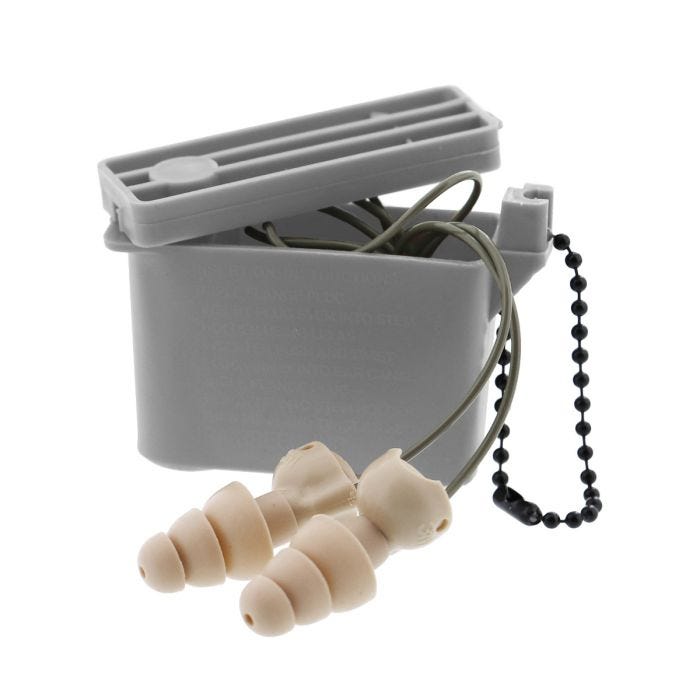 3M™ Combat Arms™ Earplugs (CAE) meet the demanding hearing protection needs of the armed forces. In the Open/Weapons Fire mode, CAE allows greater situational awareness than a common foam earplug yet helps attenuate dangerous peak levels with a filter element that reacts quickly to provide increased protection. In the Closed/Constant Protection mode, CAE protects against high-level steady noises like those in tracked vehicles and air transport. The corded version of the Combat Arms utilizes a new finger-touch rocker cover that can be operated while the earplug is in the ear.

The level-dependent technology used in the earplug has been tested and found to be protective up to approximately 190 dBP for outdoor exposures (sufficient to cover most of the weapons in the military inventory, including shoulder-fired rockets)*. The earplug sizing options for the single-ended Combat Arms™ accommodate 98% of the adult population’s earcanals for proper fit. There is a 100% product testing protocol for impedance characteristics. Combat Arms earplugs do not require batteries and include convenient retention cords. The single-sided versions feature an in-ear switching mechanism for the user to toggle between impulse noise and steady state noise hazards (23 dB NRR in the Closed/Constant Protection mode).

3M is Leading the Advancement of Hearing Conservation™.

The Combat Arms Earplug CAE is a U.S. Army-improved low-tech, passive device that works without batteries. It is easy to maintain and compatible with most military headgear. The one size fits all but the smallest ear canals.

Service personnel must have their hearing protected from steady-state noise from armored vehicles, carrier flight decks, and airfield, flight lines, and from impulse noises such as weapons fire and explosions. Such hearing protection cannot be allowed, however, to impair the ability of the military personnel to hear clearly radioed information. Shouts of warning, vehicle noise, the closing of a rifle bolt, steps in leaves, etc.